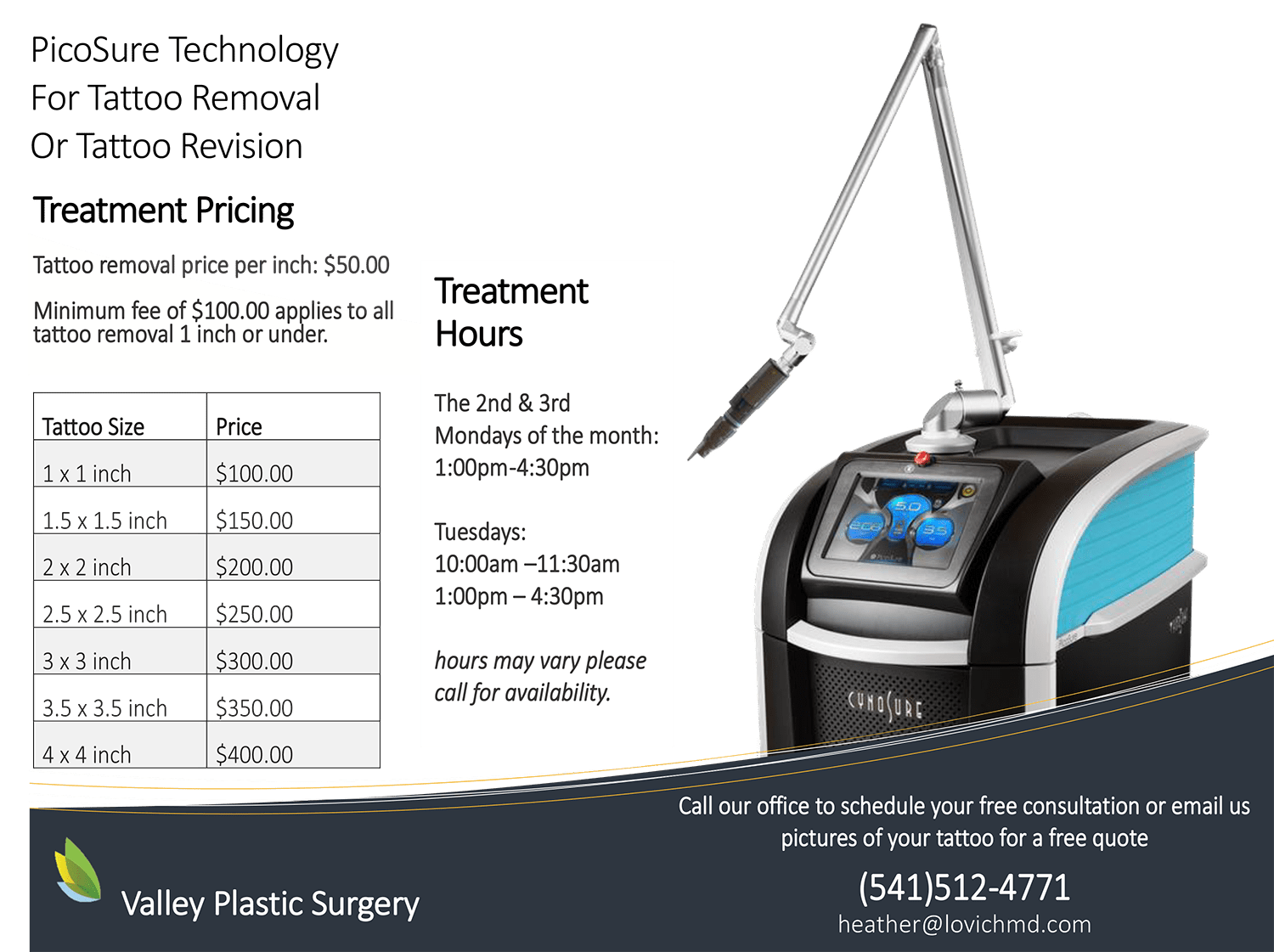 Valley Plastic Surgery is the first, and most experienced practice in Oregon to offer the PicoSure Laser, and one of only about 30 locations in the US.
The PicoSure laser delivers energy to the tattoo ink in picoseconds which is one hundred times faster than old technology that only delivers energy in a nanosecondFaster laser = quicker clearing of tattoo ink.

Less time is needed between PicoSure treatments (4-6 weeks) versus existing lasers that require 6-8 weeks between treatments.

Easily removes blue, green, orange and yellow inks, which were once considered the toughest colors to remove with existing nanosecond technology (aka the older tattoo removal lasers).

Studies reveal greater than 75% overall ink clearance in only 1-2 treatments.

PicoSure is removing tattoos in a fraction of the number of treatments required by lasers with old technology (i.e. Q-Switched Ruby, D YAG, AlexELETE, Astanza, MedLight, Sinon, Palomar and Spectra.

Q. Will the PicoSure Laser treatment cause scarring?
A. No, the PicoSure Laser does not cause scarring. However, the laying down of ink in the tattoo application process can cause slight scarring that becomes more visible after the tattoo is removed. This can show up in the form of a “shadow” of the original tattoo. This usually becomes unnoticeable after the area receives normal, seasonal, sun exposure.

Q. Why is the price per session so expensive?
A. PicoSure has advantages over other tattoo removal lasers in that fewer treatments are necessary for tattoo removal. Comparatively with other lasers, the cost is ultimately less to have the tattoo removed sooner. Additionally, Valley Plastic Surgery has no hidden charges for numbing (unlike other practices who add it to the cost of the treatment) and no consultation fee.

Q. Will the PicoSure treatment hurt?
A. The treatment varies from minimal pain to somewhat similar to getting a tattoo. Our staff can numb the area prior to the procedure if necessary for comfort. Patients may experience some redness, bruising or crusting after being treated but that will quickly subside within about one week after treatment.

Q. Why do I have to wait 4-6 weeks between treatments?

A.The Picosure laser tattoo removal treatment breaks up the pigment in the tattoo so that your body can naturally dissolve it. It takes 4-6 weeks to get the full effect of the fading from this treatment which leads to less overall treatments and lower costs.

Tattoo Cover Up
Want to replace a tattoo, but are not interested in a much bigger more elaborate costly design? Let Valley Plastic Surgery prepare you for that tattoo cover up using the same laser tattoo removal process allows the tattoo to fade enough for a tattoo artist to easily cover it with a new tattoo! See below for tattoo removal before and after pictures and witness how the tattoos fade with each treatment.

How Does Laser Tattoo Removal in Medford Work?

A. Not all lasers are created equal. Picosure is dramatically more effective than other lasers because it uses impact compression rather than heat to break up the pigment, which is also why it hurts less.
The Picosure laser is designed to effectively target the ink that resides just under your skin. The laser breaks down the ink particles into smaller fragments which are then removed through your body’s natural cleansing process. This cleansing process generally takes between 4 to 6 weeks to remove the maximum amount of ink pigments.  Scroll down to check out the tattoo removal before and after pictures of our clients.

Tattoo Removal Medford Oregon Before and After Photos of Actual Clients

Other Tattoo Removal Before and After Photos 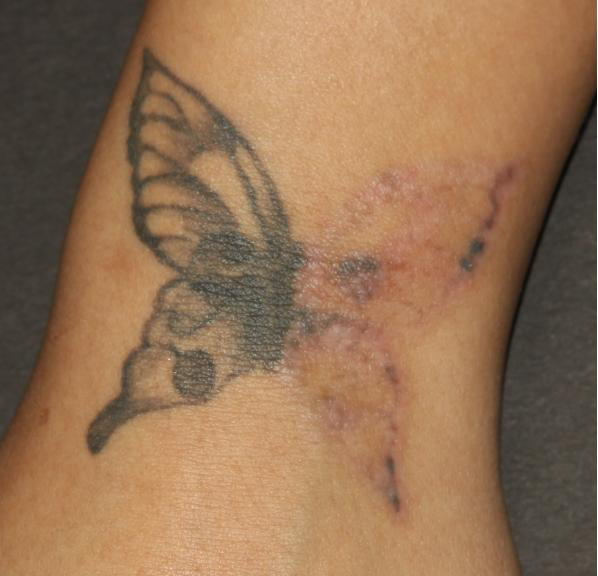 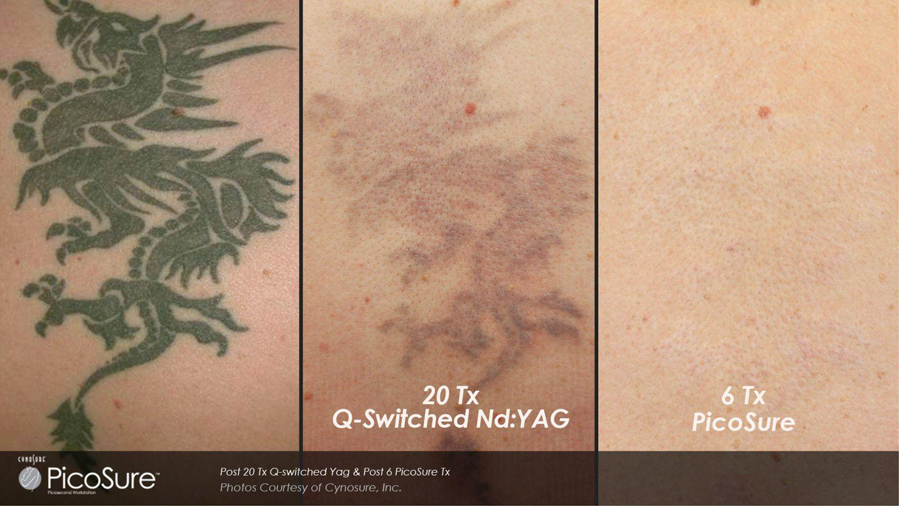 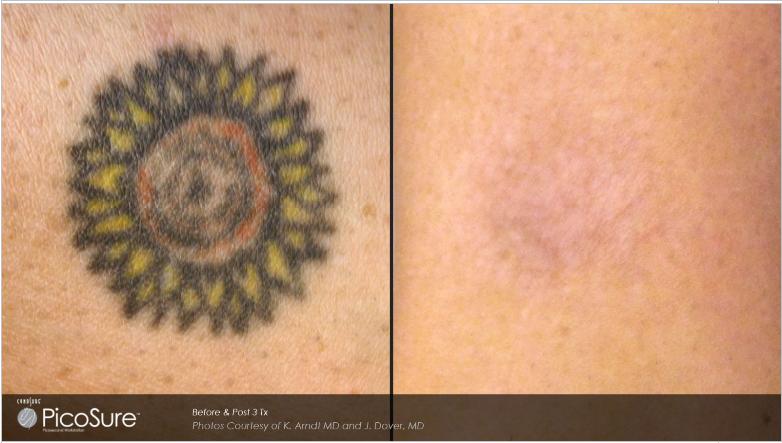 PicoSure Tattoo Removal After Only 3 Treatments 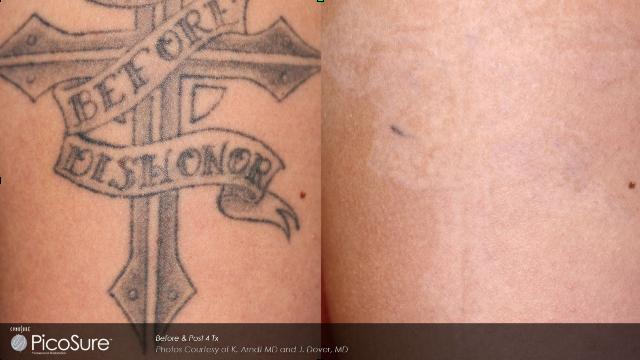 PicoSure Tattoo Removal After Only 4 Treatments
The removal process typically takes between 3-6 treatments.
Are you one of the thousands living with bad tattoos? Are you thinking about a tattoo cover up? Or are you just tired of your tattoo? Bad tattoos are no longer a permanent mistake. Valley Plastic Surgery was the first location in Southern Oregon offering the Picosure laser tattoo technology to address all of those questions. Call today for a complimentary tattoo removal consultation at: (541) 512-4771.

Thinking of revising your current tattoo?

Let us remove unwanted ink from your tattoo so you can make the desired improvements. Call today to schedule your free consultation. 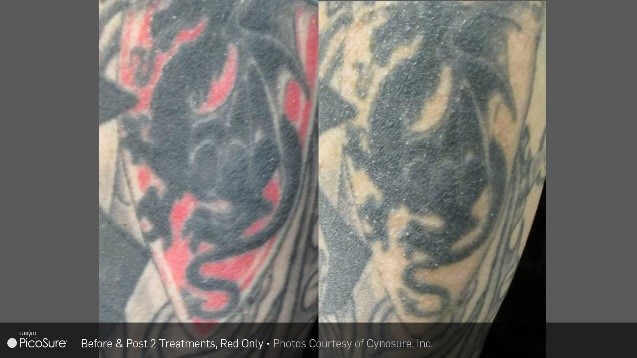 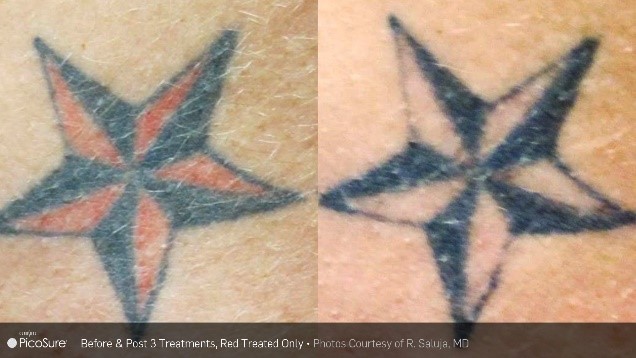